Meet Tahani Baakdhah Who Brings Science to Life Through Needlework 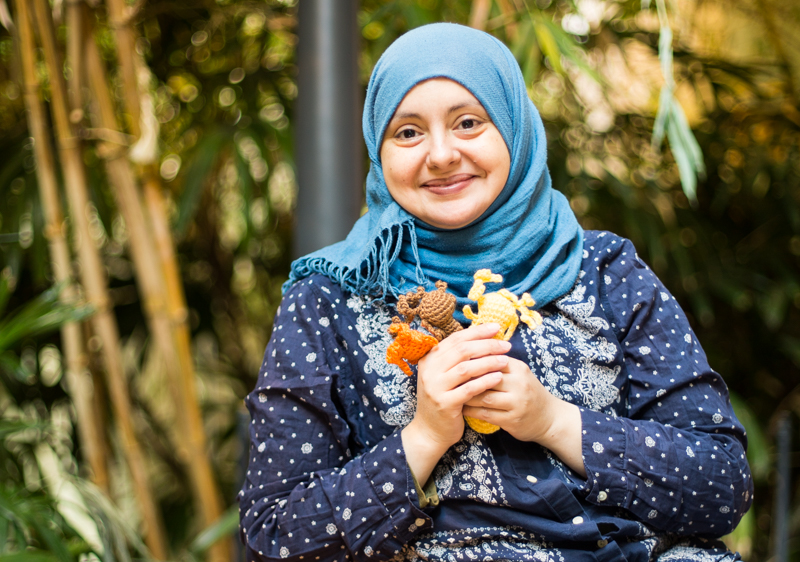 Known to her 11,000 Twitter followers and 2,225 Instagram followers as @thepurplelilac, Tahani Baakdhah is passionate about sharing her love of science with the public. Baakdhah is a PhD student enrolled in the graduate program at the Institue for Medical Science and studying stem cells in the retina in the Donnelly Centre. She’s also an avid crocheter who uses her artistic talents to bring the neurons, photoreceptors and cells she studies to life. She recently spoke with writer Erin Howe about her research and her unique way of sharing her work and promoting science literacy.

What inspired you to crochet your PhD?

Every time I look under the microscope, I see different kinds of cells, which motivates me to create my own patterns to crochet. I took up the craft in 2010, after I joined Instagram, which was a new platform back then. I saw posts about amigurumi, which are little crocheted figures. My kids were still little and I wanted to make custom toys for them. I watched a lot of YouTube videos, practiced all kinds of stitches and taught myself how to crochet. By the end of 2012, I joined the Toronto Etsy team and started to participate in their mobile pop-up markets. I started to make science crochet in June, when SciCommTO invited me to help them introduce the Knit a Neuron workshop in Toronto, an event that originated in the UK.

Tell me about your research.

I’m a member of Professor Derek van der Kooy’s lab. We’re trying to grow retinal stem cells from adult mouse models or pluripotent stem cells, which are like master cells with the potential to make any kind of tissue or cell. We’re also trying to differentiate these kinds of stem cells to various kinds of photoreceptors and retinal pigment epithelium (RPE), which is the pigmented layer of the retina. As well, we’re trying to inject these cells into blind mice to see if they will work, integrate and interact within the blind model.

For my thesis, I’m working on expanding the number stem cells of in a bioreactor.  These kinds of stem cells are very rare — only one in 1:500 cells in our eyes are stem cells. These cells are multi-potent, they can give rise to a variety of different kinds of retinal cells in a dish. So, if we want more photoreceptors and more of the pigmented layer, then we need to encourage the stem cells to divide symmetrically to create more versions of themselves. In another project, I’m trying to convince stem cells to produce more of the RPE layer. It’s a challenge and many labs around the world are having a hard time doing this.

You’ve also been part of other initiatives to promote science communication. Can you tell me about some of these activities?

I’ve been fortunate to do some science outreach with the Donnelly Centre. In September, I also participated in Soapbox Science Toronto and got to meet a lot of parents and kids. I used my crocheted models to explain to the children how we see the world, what blindness is and how we can treat it with stem cells. I’ve also been invited to many symposiums, conferences and talks just to speak about my science art. People often ask me afterward for the patterns I’ve created, which led me to write a science crochet book. The manuscript is finished and I’m now looking for a publisher. It’s a mix of crochet patterns, science communication and education.

What makes you so excited about science communication?

The public is so far removed from scientific information. There are scientific papers, which aren’t really open access. Or there’s traditional media, but most journalists aren’t scientists. And there aren’t many ophthalmologists or researchers who use social media. They’re busy and they might go to conferences or symposiums, but they’re talking to other scientists. It’s nice to go to people where they are and reach them on whatever platform they use.

You’re planning to complete your PhD next year. What are you hoping to do next?

I’d like to finish my PhD and follow it up with a two-year post-doctorate to build more experience. I completed medical school in 2003 at King Abdul Aziz University Faculty of Medicine and I would love to further my clinical training to become an ophthalmologist. This is my dream.