After a climbing accident left him paralysed from the neck down, newly appointed U of T Prof Michael Garton forged a new career in research. 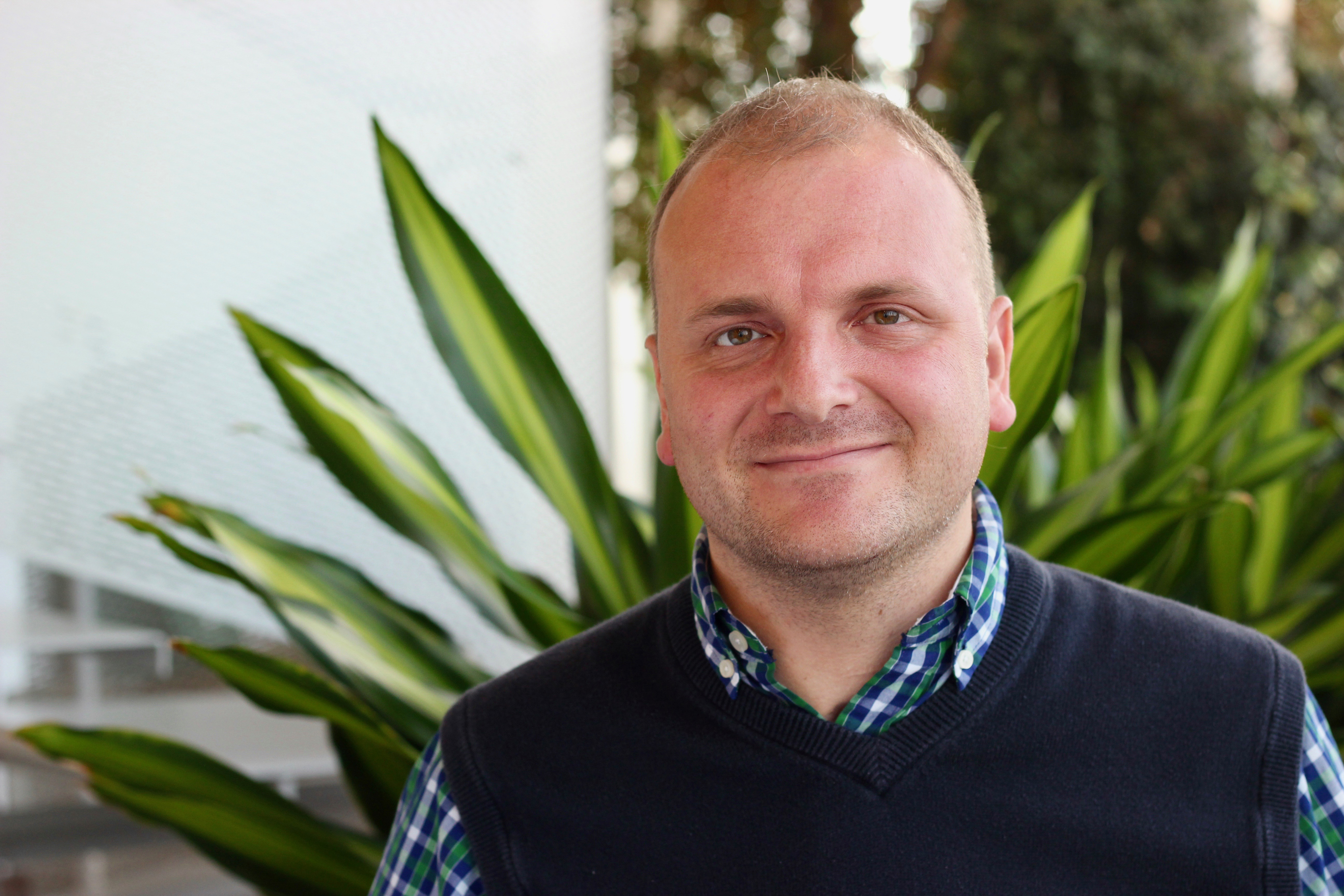 In his new lab at U of T's Institute for Biomaterials and Biomedical Engineering, Michael Garton plans to create new kinds of cells that can heal disease.

On a hot July day in 2006, Michael Garton was living his dream. Then 24 years old, the British climber was scaling the tallest vertical rock face in Europe – Norway’s Troll Wall – hoping to become the first person to reach the top climbing solo.

His bid was all the more audacious in light of the country’s no-rescue policy, which said climbers stranded on the notoriously inaccessible wall had to fend for themselves. Garton estimated that if he climbed for up to 18 hours each day, he could reach the peak – about the height of two CN towers – in seven to 10 days.

But then disaster struck as Garton was hit by rock fall, plunging 40 meters down the cliff before getting caught by his climbing equipment. The fall left him paralyzed and all but dead.

The same tenacity that drove Garton up the calamitous mountain 12 years ago has helped him build a successful research career culminating this month with an appointment of an Assistant Professor at the University of Toronto’s Institute for Biomaterials and Biomedical Engineering. “When you are climbing and you know you are not going to be rescued if anything goes wrong, there’s a feeling of being super committed and it’s totally down to you,” he says. “The mindset I built doing that has really helped me doing science.”

With climbing, he says, “it is mostly obvious where you have to go – you just have to keep pushing forward.” But in science, “it is often difficult to know where to go. Even when you don’t feel like you’re making any progress, or you’re failing at everything, just keep trying, keep thinking about the problem in a different way.“

One of the first projects in his lab will be to engineer human cells into a kind that can mend throbbing pain in aging joints. For example, for arthritic knees in which the pain is caused by inflammation, Garton’s plan is to take out some knee cells, insert new genetic circuitry encoding components engineered to both sense the inflammation and respond to it by releasing anti-inflammatory molecules, and then put the cells back into the knee.

“The cells will respond as and when necessary and you as a patient will never experience the disease as it is being treated by your own tissue,” he says. Arthritis will be a test case, but the same principles could then be applied to a variety of diseases. “I want to develop a basic chassis of the cell that can be fine-tuned to detect and respond to different diseases.”

Garton says that being at U of T, with “world-renowned experts in various diseases working just across the street or in the next building,” will be helpful for establishing the collaborations needed to bring new therapies to patients.

A chemist by training, before the accident Garton thought little about applying his scientific knowledge to better society. But his views shifted during the year-long recovery in the hospital, where he was surrounded by caring staff while grasping the confines of his new reality.

“I could kind of see that a lot of the staff at the hospital had the same passion for their job as I had for climbing,” he says. “I realized then how selfish I’ve been my whole life by just focusing on how much I could enjoy myself going climbing. It really hit me – that the thing to do is to apply your passion and drive and hard work to something that is actually going to benefit society and other people and not just yourself.“

That Garton is alive is only thanks to a chance encounter a few days before his accident. While preparing for the climb, he asked a passerby with a telescope if he could borrow it to make out the safest route and avoid a rockfall. That summer was unusually warm and the heat had melted the ice inside the cracks of the north-facing cliff that glues together loose pieces of rock. The thawing ice released “boulders the size of trucks.”

Although Garton tried to avoid the worst areas of rockfall, two days into the ascent a lump of rock came off as he was climbing and knocked him off. The fall left him unconscious and when he woke up, he could not move. “I woke up and had a really excruciating pain in my neck,” he says. “That’s when I realized I had broken my neck and was paralyzed.”

“It was a very odd experience, just being conscious and not being able to fight it, just having to lie there and look at the incredibly serene landscape and just think, ‘OK, I only have a few more hours left and then it’s death.’”

But what Garton did not know was that the man with the telescope had set up camp with friends to watch him climb. When the campers noticed Garton’s body hanging off the cliff, they alerted the authorities, who despite the no-rescue policy sent a Royal Norwegian air force helicopter that was training in the area.

Ten hours passed before help arrived. It was nighttime, and despite the midnight sun, the temperature had dropped below zero. Garton was by then in a state of severe hypothermia and had slipped into a coma. His heart stopped several times, requiring 16 defibrillations to be revived during transport to the hospital, where he stayed on life support for three weeks before coming out of the coma.

In the hospital, Garton had to relearn how to do the most basic things, including how to breathe without the help of the ventilator. “When you are paralyzed, everything that you have ever learned as a tiny child, down to brushing your teeth, everything is wiped away,” he says. “You go from where what you are aiming to do this year is to be the first person to climb the highest cliff in Europe and then a few months later the main thing you are trying to achieve is breathe on your own for 10 seconds.”

Garton learned how to control a computer using his voice and in September 2007, just three months after leaving the hospital, he returned to school to earn a master's degree and then a PhD in computational biology at the University of Nottingham.

“I saw disabled people go both ways, a lot of people give up,” he says. You have to make a choice at some point. Do I keep going or do I give up?”

In 2012, he moved to Toronto with his wife Hannah, who is Canadian. After a brief postdoctoral stint in the lab of Shoshana Wodak, then at the Hospital for Sick Children, he joined Professor Philip Kim’s group at U of T’s Donnelly Centre for Cellular and Biomolecular Research. That experience, he says, helped him become a better scientist. “At Donnelly, I wasn’t treated any different to anybody else, not like I was anything special for being disabled. I was held to the same standards and that helped me to really up my game and become a much better scientist.”

"I like the feeling of being able to invent something to solve the problem. You are not restricted by what nature is doing... you are only limited by what you can imagine you can do"

While working with Kim, Garton invented a computational method for designing smart drug molecules that last longer in the body to reduce the frequency of taking medication. The idea came to him after a friend’s toddler was diagnosed with Type 1 diabetes and had to receive daily insulin injections. Garton came up with a way to convert natural protein molecules into their mirror-image forms, which retain the same therapeutic properties but are much longer-lasting.

“I like the feeling of being able to invent something to solve the problem. You are not restricted by what nature is doing. You can be somewhat more creative – you are only limited by what you can imagine you can do.”

Garton’s appetite for “creating new stuff” goes beyond science. Two years ago, he took up stone carving and has created life-sized sculptures of the human ear, eye and the brain. His other hobbies include sailing, but he prefers activities in which he can be fully independent.

Garton started sculpting by mouth after Hannah, who works as a photographer and is also his full-time carer, gave him wooden handled carving tools as a gift. At first, he tried velcroing regular tools to his arms but when that did not work out, he gripped the wooden handled tools with his mouth. With no instructions available on how to do it, he experimented with chipping and scraping until the stone started taking shape.

“Loads of people sculpt, but having been forced to do it by mouth means you are doing something new and I like that,” he says. “For me, having a disability is background noise. In some ways it’s annoying, but it also makes life interesting.”

At times, Garton himself can’t quite believe how things have turned out.

“I’m still pinching myself to be honest. Can’t feel it but I’m trying”, he says with a laugh.