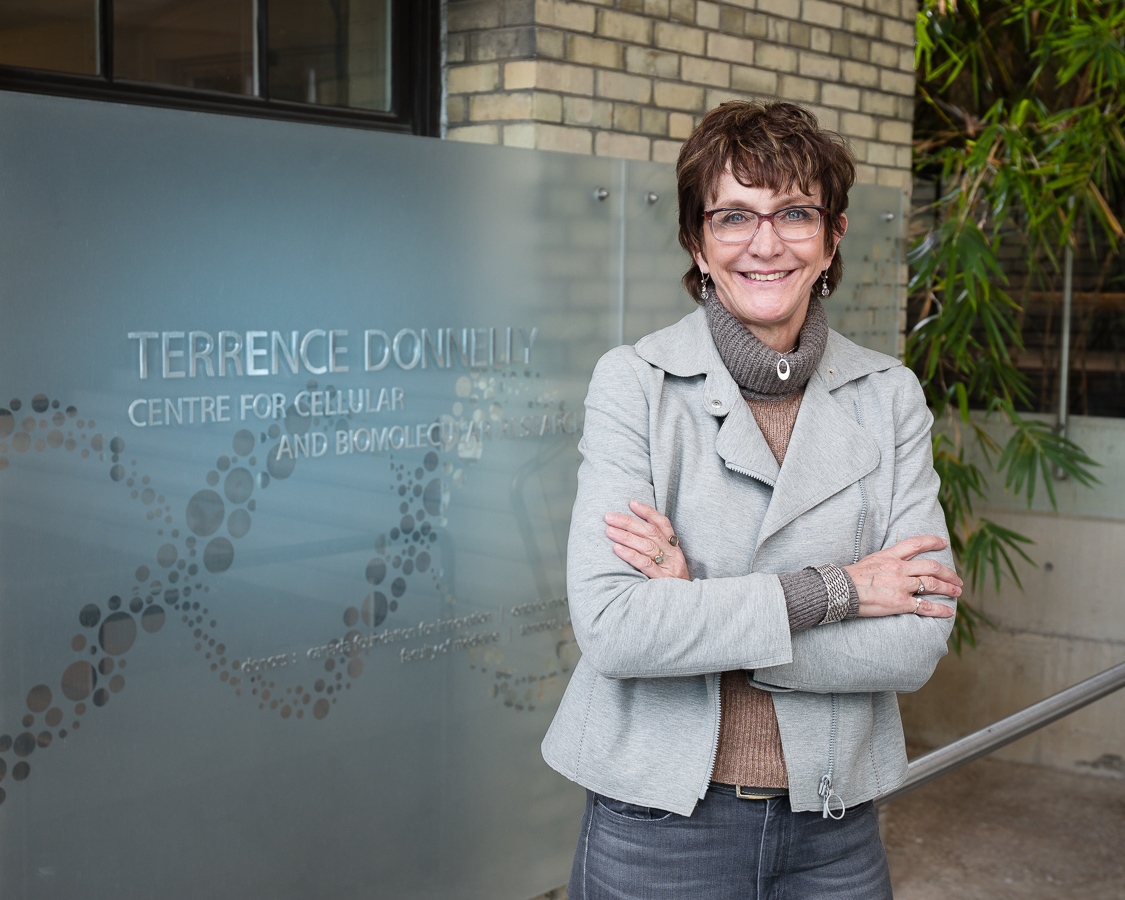 University Professor Brenda Andrews has much to be proud of as she steps down after 15 years as founding director of the Donnelly Centre for Cellular & Biomolecular Research.

Under Andrews’ direction, the Centre has become a fertile training ground for future scientific leaders, housed in a flagship 21st century science research facility. Public outreach has blossomed, and she’s had a powerful impact as a role model and champion for young scientists. Andrews stepped down last month after three successive terms as director.

“The decision to begin my PhD studies in Brenda’s lab almost 30 years ago remains one of the most important and positive decisions I have ever made,” says Vivien Measday, now an associate professor at the University of British Columbia.

“Brenda inspired me with her outstanding work ethic, unbelievable efficiency, energy and focus as well as her ability to promote a collaborative research atmosphere with other labs. She has always been and will remain my number one role model for what a female scientist can achieve in Canada.”

Under Andrews’ leadership, the Centre has become a global hub for multidisciplinary research, education and innovation in biomedical science. Andrews also helped establish competitive internal fellowships and awards to attract and honour the best graduate students and postdocs, many of whom have gone on to have successful careers in industry and as independent investigators in world-leading research institutions.

“The Donnelly Centre today is recognized as a shining beacon of excellence for Canadian health research and Brenda as founding director could not be more widely admired and respected,” said former U of T President and Dean of Medicine David Naylor during a recent online event that celebrated Andrews’ legacy amid the coronavirus pandemic.

“Her qualities of leadership and good judgment have been widely recognized as well as her scientific rigour and ingenuity. It’s an extraordinary legacy,” said Naylor, who was Dean of Medicine when the Centre was founded and appointed Andrews as its founding director.

Globally recognized for her pioneering research in large scale genetics and cell biology, Andrews has authored more than 200 scientific articles and reviews and received numerous national and international awards. She was named Companion of the Order of Canada, the highest national honor that can be bestowed on any citizen. Andrews is a fellow of the Royal Society of Canada, an international member of the U.S. National Academy of Sciences and holds the highest academic rank of University Professor, among other honors and appointments.

"The Donnelly Centre today is recognized as a shining beacon of excellence for Canadian health research and Brenda as founding director could not be more widely admired and respected" - David Naylor, former U of T President

Bridging the split between basic and applied sciences, Andrews has long supported efforts for the discoveries in the Centre to be turned into medical advances. She spearheaded the launch of the Accelerator for Donnelly Collaboration, a biotechnology incubator for start-ups and companies to partner with the Centre’s investigators. The accelerator was made possible thanks to a generous gift from Terrence Donnelly, whose initial gift also helped found the Centre.

“The past 15 years have been a remarkable journey,” says Andrews. “These are exciting times for biomedicine, in no small part thanks to the insights and the technological advances made by the Centre’s investigators.”

“Together we have built a vibrant research community and I am tremendously proud of all we have accomplished."

Andrews has recruited and fostered a community of top researchers from diverse fields of science at all stages in their careers, who are asking some of the biggest questions in biology and inventing technologies to answer them. During her tenure, the Centre’s investigators have transformed our understanding of the core cellular machinery and how it is linked to disease.

Concurrently, the Donnelly Centre has increased female representation among trainees to 40 per cent, while more than half of the global speakers invited to give seminars at the Centre have been women. Science public outreach has also thrived, with the Centre hosting educational events aimed at instilling curiosity and love of science among young Canadians, especially girls.

Andrews has been instrumental from the outset in creating the environment for Donnelly Centre researchers to flourish.

Housed in a stunning building fit for 21st century science, with open concept labs that foster collaboration, the Centre was envisioned as a modern-day successor to the Banting and Best Department of Medical Research (BBDMR). The iconic BBDMR institute was founded in 1930 by Nobel laureate Frederick Banting and Charles Best on the heels of their insulin discovery; it was the first U of T department dedicated solely to research.

At the turn of last century, late U of T Professor Cecil Yip and Professor Emeritus James Friesen recognized the need to draw expertise from different fields of science to fully harness the potential of rapidly evolving genomic technologies in health research.

Andrews, who previously served as Chair of BBDMR and Chair of the Department of Molecular Genetics, oversaw the integration of the BBDMR labs with research teams from the Faculties of Medicine, Engineering and Arts and Science into the newly founded Donnelly Centre in 2005. She also led the recruitment of top research talent, which has continued apace in spite of the COVID-19 pandemic.

Andrews completed her doctoral and postdoctoral training at U of T and the University of California San Francisco, respectively, returning to U of T as an assistant professor in the Department of Medical Genetics (now Molecular Genetics), which she also chaired from 1999-2004.

A scientific community builder, Andrews contributes her time and expertise to various organizations at home and abroad. She is the founding editor-in-chief of the journal Genes|Genomes|Genetics, an open access journal of the Genetics Society of America. She is also as a member on the Governing Council of the Canadian Institutes for Health Research, the primary federal funding agency for medical research, and she served as the inaugural director of the Genetic Networks program at the Canadian Institute for Advanced Research.

Andrews’ final term as director ended on June 30, 2020. Her long-time collaborator, Prof. Charles Boone, will serve as Interim Director until the appointment of new Director by the Faculty of Medicine.