Artificial intelligence-powered data processing is accelerating research across scientific fields and cell biology is no exception. The tedious job of analyzing microscopy images by eye can now be replaced by algorithms, so long as they are properly trained to know what cellular features to look for.

Now two Donnelly Centre researchers are being recognized for their work on developing new technologies that merge cell microscopy with machine learning, a form of AI, to advance research in biology and regenerative medicine.

Research associate Mojca Mattiazzi Ušaj and postdoctoral fellow Shuailong Zhang are the winners of the 2020 Research Excellence Awards, awarded annually to outstanding postgraduate researchers in the Donnelly Centre whose projects cross the boundaries between scientific fields.

Working with geneticists, cell biologists and computational scientists, Mattiazzi Ušaj has created an automated pipeline for extracting from individual cells the information about their inner compartments, or organelles, from microscopy images each containing hundreds of cells.

Zhang, who has an engineering background, has teamed up with stem cell scientists and bioengineers to develop AI-powered microrobots that can find and collect the stem cells from brain tissue for applications in regenerative medicine.

“The caliber of this year’s applicants was as outstanding as ever, which speaks to the research productivity of our institute even during the pandemic," says Charles Boone, a professor of molecular genetics and the interim director of the Donnelly Centre. "The winners, Shuailong and Mojca, presented amazing projects, in very different fields, and they both highlight the collaborative and interdisciplinary nature of the Centre.”

Large-scale approaches in genetics and microscopy have enabled collection of rich datasets containing clues to how disease unfolds at the cellular level. But extracting this information has proved a bottleneck with researchers in many labs still processing cell images by eye. 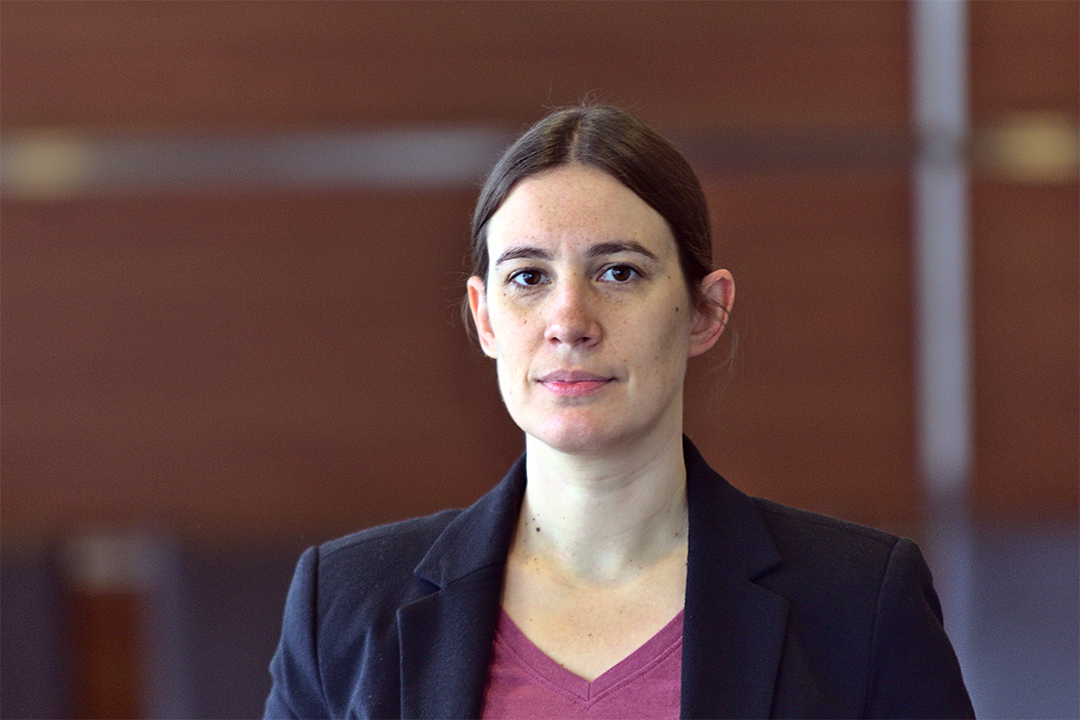 The result is a pipeline for extracting from single cells hundreds of quantitative measurements that describe internal organelles which have distinct cellular roles such as nutrient uptake or waste disposal. With benchmark measurements collected from millions of individual healthy cells, these can then be used to better assess how genetic mutations or drug compounds affect health and fitness at the subcellular level.

Mattiazzi Ušaj has mainly been working with yeast cells, which are structurally similar to human cells but have smaller genomes and are easier to manipulate in the lab. In one project, she looked at how the deletion of each of the yeast 6,000 genes impacts endocytosis, a process by which cells take up nutrients and signals from their surrounding and transport them inside tiny vesicles into other organelles in the cell’s interior. The study revealed the genes involved in endocytosis and will aid further research into how it goes awry in disease. But it also led to an unexpected finding, which was that most gene deletions did not have the same effect in all the cells.

If a genetic error does not manifest in all the cells that have it, this is known as incomplete penetrance. Individual cells can also differ in the severity of a particular trait, but the molecular mechanisms for either phenomenon are not known. Mattiazzi Ušaj can now begin to uncover them in a systematic manner using the automated pipeline she developed. This will be one of the first projects in her own lab at Ryerson University where she will start as Assistant Professor in January.

“We’ll try to figure out for a particular genetic background and environment, what are the different sources of variability that contribute the most,” she says. The research could bring a better understanding of disease and how to treat it.

The award is a great motivation for future work, she said.

“In research you have more downs than ups. So this recognition is very motivating,” she says. “I’m very fortunate to have had great colleagues and collaborators contributing to my research, and amazing support from Charlie and Brenda.”

Shuailong Zhang’s research is combining AI with regenerative medicine to develop a robotic microsurgery method for capturing stem cells from brain tissue. The highly collaborative projects brings together engineering expertise from the laboratory of Zhang’s postdoctoral adviser Aaron Wheeler with stem cell biology, in collaboration with Cindi Morshead in the Donnelly Centre and Peter Zandstra, a former investigator at the Centre and now Director of Michael Smith Laboratories at the University of British Columbia. 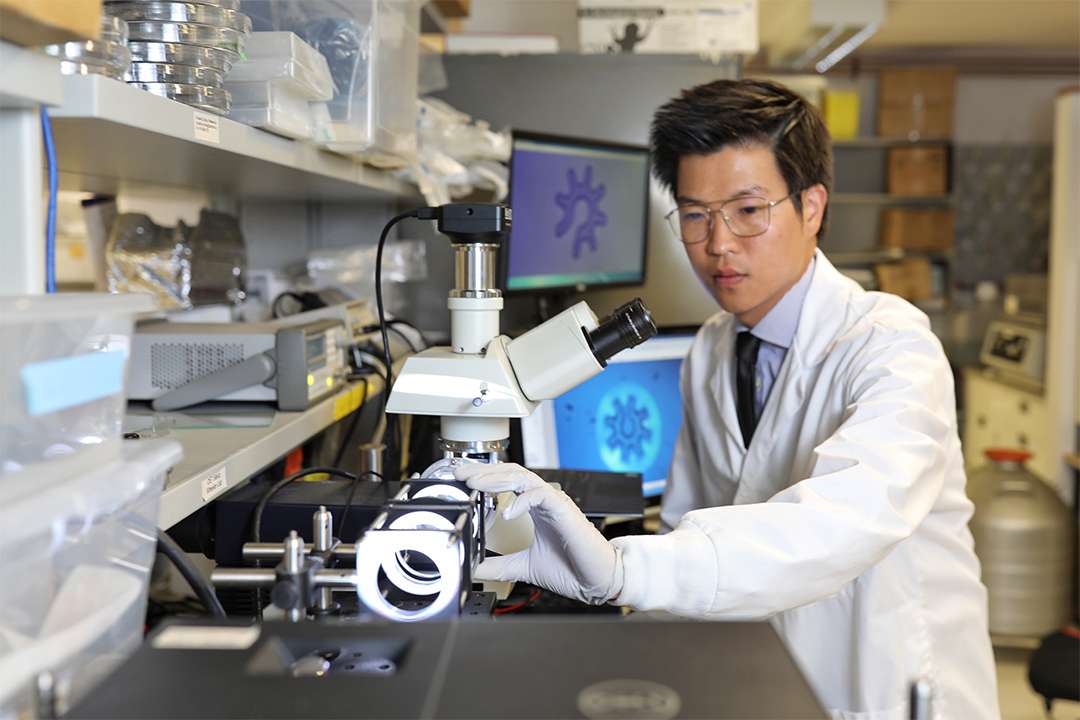 Postdoctoral fellow Shuailong Zhang pictured in the lab while operating the platform for microrobotic cell manipulation (photo by Lisa Ngo). Stem cells are special because of their ability to self-renew and turn into other cell types, raising hopes that they could be used to grow transplant tissue in the lab as well as spur regeneration in the body. Researchers around the world seek to harness the scarce resident stem cells in the brain for the treatment of stroke injury, Alzheimer’s and other forms of brain damage. A method that plucks intact stem cells directly from brain tissue would enable the discovery of the molecular signals these cells receive from their microenvironment to activate regeneration.

Zhang has already developed light-controlled microrobots that can handle individual cells in a crowded environment. Known as optoelectronic tweezers, the method uses light beams to trigger an electric field which propels the robot in a desired direction. The tiny robots, whose diameter equals twice that of a human hair, can move the cells around and selectively pick up individual cells from a group of cells for molecular profiling.

At present, the stem cells have to be fluorescently labeled so that Zhang can spot them under the microscope and direct towards them the light beams using a joystick. But the stem cells are rare and often mixed with cellular debris, which makes their isolation difficult. The ultimate goal is to automate the entire collection process so it can be executed by a computer algorithm.

Working with Mike Shaw, a machine learning expert at the University College London, UK, he is developing an algorithm that will learn from microscopy images what the brain stem cells look like to be able to one day guide the microrobots straight to them inside the brain slice. Earlier this year, the international team won an inaugural grant of more than $1million from the new Canada-UK Artificial Intelligence Initiative for the project.

AI-powered microrobots offer many advantages—the cells could be harvested in their natural form without having to label them first and the harvesting would be more accurate and efficient.

“You can train the network to find the cells more accurately,” says Zhang. “And if we can make the whole thing automated, it would also increase efficiency and reproducibility of the system and make it more widely usable, not only for stem cells, but also for many other cell species.”

The award is an important recognition to Zhang, who hopes to build a career as an independent researcher in Canada or in China where he is from.

“This award is important to me because it recognizes my contribution in developing this technology, “he says. “But the award is not just for me—it is also for everyone else on our team working on this project.”