The Development and Function of the Nervous System

In academia, researchers can end up isolated in their departments, detached from what people are doing in other academic communities. The Donnelly Centre facilitates community and communication, and staves off intellectual isolation and opens up a world of new possibilities and discoveries. 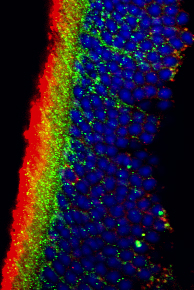 Retinal stem cells (green) transplanted into the mouse eye Our lab carries out various neuroscience and developmental biology research projects, and has had a history of collaborating. Our lab shares space with the Zandstra and Audet labs, both focused on bioengineering. In particular the Zandstra lab is developing new ways of expanding cell production using bioreactors. My lab is looking at using some of this technology to increase our own cell production for our research into stem cells. The ultimate hope for stem cell research is, of course, to have the ability to replace cells lost to damage or disease.

Our lab has three main areas of interest: learning and memory, developmental and stem cell biology, and the neurobiology of motivation. With respect to learning and memory, we use the power and specificity of modern molecular genetics to reveal the component processes of learning and memory. We are working on whether we can separate associative from non-associative learning, short- from long-term memory, and learning and memory in one sensory modality from that in another sensory modality. In terms of stem cell biology, my lab investigates the nature of stem cells (embryonic and adult), the concept of immortal cells, and the differentiation of embryonic stem cells, which are capable of forming any tissue in the body, to neural stem cells. More recently, we have discovered adult retinal stem cells in the eye as well separate adult pancreatic stem cells. These stem cells may be sued in the future to treat blindness and diabetes. Finally, we are studying the neurobiology of motivation with the overall hypothesis that separate neural mechanisms underlie the rewarding effects of opiates in drug-naïve versus drug-dependent and -deprived organisms.

With respect to Neural Development & Stem Cell Biology we are interested in asymmetric cell division, retinal stem cells, pancreatic stem cells, as well as cell lineage and brain development.  Our lab is interested in the lineage steps in the development of the mammalian brain from totipotent embryonic stem (blastocyst) cells to neural stem cells to more restricted neural progenitor cells that make neurons and glia. Of particular interest are the earliest steps in the production of self-renewing neural stem cells from mouse embryonic stem cells, in terms of discovering and testing novel candidate neural determination genes. Neural stem cells also are present in adult and even elderly mammalian brains, and these stem cells are being localized in adult brains and being characterized in terms of their proliferative kinetics and growth factor requirements in vivo and in vitro. Finally, adult neural stem cells can produce new neurons and glia in adult mammalian brains in vivo and we are testing the ability of these new cells to re-establish function in animal models of human neurological disorders. Our lab discovered adult mouse and human pancreatic stem cells, whose progeny have the ability to produce new endocrine insulin producing cells that may be useful in treating diabetes in the future. Our lab was the first to report retinal stem cells in the adult mouse and human eye. This work has resulted in the ability to grow retinal stem cells in large numbers in the lab and differentiate them into all the different cell types in the retina. More remarkable we found a way to activate retinal stem cells resident in the eye.

The primary objective for our Neurobiology of Motivation research is to characterize the neurobiological substrates of motivation.  Our overall hypothesis is that separate, double dissociable, neural mechanisms underlie the rewarding effects of opiates in drug naive versus drug-dependent and deprived animals.  Lesions of the tegmental pedunculopontine nucleus (TPP) block the conditioned place preferences produced by morphine in drug naive rats, but not in opiate dependent and deprived rats.  Dopamine antagonists block the conditioned place preferences produced by morphine in opiate dependent and deprived rats, but not in drug naive rats.  We hypothesize that TPP and dopaminergic manipulators identify a double dissociable fracture line in motivational mechanisms that splits a non-deprived motivational process from a deprivation induced motivational process.  We suggest that this distinction cuts across motivational stimuli (for example, TPP lesions but not dopamine antagonists block the rewarding properties of food in food sated rats and dopamine antagonists but not TPP lesions block the motivational effects of food deprivation). A similar distinction underlies the rewarding effects of nicotine in drug naïve versus drug dependent individuals.

A mutational analysis has begun to reveal the component processes of Learning and Memory, our third area of research. We have developed associative (classical conditioning) and non-associative (habituation) learning paradigms using olfactory and taste stimuli in the best-understood multicultural organism, the worm C. elegans. Mutational screens in progress have identified new genes, which code for critical components of associative (lrn-1 and lrn-2) and non-associative (adp-1) learning.  These new genes reveal the separable neuronal and molecular substrates underlying associative learning and habituation. Mutations in an insulin gene (ins-1) block selectively memory retrieval but not memory acquisition.